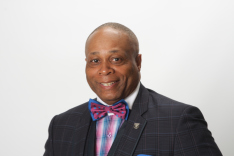 The Rev. Dr. James A. Jackson, Jr. was born in Harve de Grace, MD to the late James and Lottie Jackson. Rev. Jackson received his formal education from the Philadelphia School System and enlisted in the United States Army in 1976.  After 26 years of service, he retired as a Command Sergeant Major.  Rev. Jackson went on to continue his higher education and received his Bachelors in Management from the University of Phoenix making the Dean’s List and his Master’s in Business Administration from Trident University finishing Cum Lade.  He is also a graduate from Liberty University Master’s Program for Pastoral Studies. In 2021, Pastor Jackson received his doctoral degree in Theology from the New Jersey Institute of Theology.  And in 2022, he retired from a career total of 33 years with the U.S. Government.

On June 26, 2016, Rev. Jackson was installed as the fifth pastor of 100+ year old First Baptist Church of Belmar, NJ.  Prior to that, Pastor Jackson was ordained in 2010 as Assistant Pastor of Calvary Baptist Church, Red Bank, NJ, under the Pastorate of the late Dr. D. Crist Northington, Senior Pastor.  Earlier in his career, Rev. Jackson also served as an Associate Minister with both the Crusaders for Christ Church in Philadelphia, PA and then at Second Baptist Church, Long Branch, NJ.

Dr. Jackson currently lives in Neptune, NJ and is happily married to the former Delinda S. Hetherington.  Together they have two sons, Kenwyn, currently serving in the United States Army and Joshua who attends Kean University.

Rev. Jackson has a love for serving God, going to church, quality time with his family, and working with the youth and he truly believes in Joshua 24:15. "but as for me and my house, we will serve the Lord."

Deacon Bellamy Shivers was born on February 10, 1952 in Passaic, NJ.   His early education experience was in the Newark NJ School System.  In 1966 his parents moved the family to Long Branch, NJ where he then attended and graduated from the Long Branch High School in 1970.  Deacon Shivers attended Juniata College in Huntingdon, PA and Brookdale Community College in Lincroft NJ.  He later began a career at Verizon -- formally NJ Bell then BellAtlantic -- and retired in 2010 after 31 years of service.

Deacon Shivers came to the Lord at an early age and attended churches in both Newark and Long Branch.  In 2007, he was ordained a deacon at Second Baptist Church in Long Branch by Pastor Aaron N. Gibson, Sr.  Deacon Shivers joined First Baptist Church in early 2015 and continued serving God and church.  In 2016, he was named Chairman of the Diaconate Ministry of FBC by Pastor James A. Jackson, Jr.

Apt to teach, Deacon Shivers does so for the weekly Bible Study and Sunday School.  He teaches the church's Fellowcitizens' Course as well.

Deacon Shivers is married to his wife Deacon Louise Shivers for over 40 years.   They have two grown children with families of their own.

Deacon Bellamy Shivers truly believes in Matthew 6:33, “But seek ye first the kingdom of God, and his righteousness; and all these things shall be added unto you.”  He continually instills that scripture into his personal and family life as well as his bible teachings.

In 2002, Edward G. Robinson, III; wife Adrianne and their daughters moved to New Jersey. As a family, they joined Second Baptist Church in Long Branch, NJ that same year. In 2007, he was ordained a Deacon and his wife was consecrated as a Deaconess.

In 2009, having a greater call on his life, Edward and Adrianne left Second Baptist and co-founded, Plain Faith Ministry to plainly speak, teach and tell others about Jesus and the free gift of salvation.  The main focus of the ministry was to encourage, motivate and inspire people in the Lord; and to teach how the Bible is relevant for daily application.

Min. Robinson has graduated with a bachelor's degree from Trinity Institute in Hoover, AL; and he received his ministerial license and master’s degree in Theology from Saint Luke’s Evangelical Seminary in Augusta, GA.

The First Baptist Church Family welcomed Min. Ed and his wife Adrianne as they joined the church in March of 2017.  From day one, he has been a valuable part of the FBC ministerial staff; preaching and teaching God’s Holy Word.

Min. Ed served in the United States Army from 1985 – 1993.  He has over 30 years of supervisory and managerial experience working in various industries. He is currently back in the US Army as an Administrative Officer Federal Government Civilian working at Picatinny Arsenal in Dover, NJ. He is a proud Prince Hall Mason, initiated at Andrew Baskin Military Lodge #65 in Daegu, Korea. He is Life Member of the Veterans of Foreign Wars where he serves as the Post Commander of O’Brien-Major Post #2639 in Neptune, NJ; and recently Min. Robinson was elected Veterans of Foreign Wars District 6 Surgeon.

Min. Edward Robinson lives and breathes the mantra “Be better today than you were yesterday.”

In 2002, Adrianne J. Robinson was going through a difficult time in her life and that, she says "solidified" her walk with God and He began to speak to her.

Adrianne, her husband of 20 years, Edward G. Robinson, III and their daughters all moved to New Jersey from Georgia in 2002. The family joined Second Baptist Church in Long Branch that year; and five years later, in 2007, her husband was ordained a deacon and she was consecrated as a deaconess.

In 2009, the Robinson's felt a tug and pull from God to leave Second Baptist and start a ministry to plainly speak, teach and tell others about Jesus and the free gift of salvation. God gave them the name, her husband became a licensed minister; and with that, Plain Faith Ministry was born.  The purpose of Plain Faith Ministry is to encourage, motivate and inspire people in the Lord and to teach how the Bible is relevant for daily life application.

The First Baptist Church Family welcomed Adrianne and her husband Min. Ed as the joined the church March of 2017.  Later that same year, she was the facilitator of our very first Women's Retreat Weekend.

On Sunday, April 8, 2018, Min. Adrianne J. Robinson made history as being the first female minister ever licensed at First Baptist Church, Belmar.

Min. Adrianne is also an RN with 30 years experience in various areas of the healthcare industry including geriatrics, hospice and homecare. She is currently the Manager of Seabrook Home Support and is responsible for the daily management of 150 patients and 120 staff members.

Min. Adrianne is truly a spirit filled woman of God and describes herself in the Lord in the way she walks, thinks and worships in three scriptures... "But seek first His kingdom and His righteousness, and all these things will be given to you as well". Matt 6:33; "Let us not become weary in doing good, for at the proper time we will reap a harvest if we do not give up". Gal 6:9; and "...pray continually..." 1Thess 5;17.  Min. Adrianne never takes an assignment from God lightly and is always humbled that He finds use for her.